Bat Jamboree by Kathi Appelt
Batbaby by Robert Quackenbush
Bat Child’s Haunted House by Mercer Mayer
Bats on Parade by Kathi Appelt
Bats at the Ballgame by Brian Lies
But Who Will Bell the Cats? by Cynthia von Buhler
Baby Bat’s Lullaby by Jacquelyn Mitchard
Batty by Sarah Dyer
There Was an Old Lady Who Swallowed a Bat by Lucille Colandro
Hello Bumblebee Bat by Darrin Lunde
Bat and Rat by Patrick Jennings
Oscar and the Bat by Geoff Waring
Bats at the Beach by Brian Lies

Finger Puppet Rhyme: “Two Little Bats” (via Bay Views ACL)
Two little bats hanging in a cave (point both forefingers downwards)
One named Dora, one named Dave (put each forefinger forward)
Fly away Dora, fly away Dave! (fly each finger behind back)
Come back Dora, come back Dave! (bring each finger to the front) 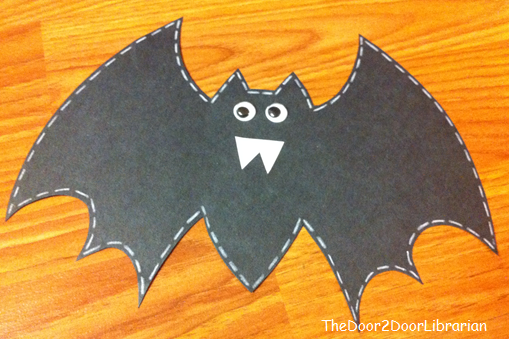 This week’s craft is cheap and easy. I created a quick bat-shaped template out of cardboard, which I used for tracing purposes. I pre-cut the bodies out of black construction paper, and used excess printer paper make a bunch of fangs. Googly eyes were used for eyes. My munchkins LOVED this craft, and I dutifully “ooed” and “ahhed” while every child proudly showed me their assembled bat.

Rule #1: Not every book is suitable for storytime (i.e. reading aloud), and sometimes the professionals get it wrong. I knew better than to rely on the Library School Journal reviews. I should have listened to my little Jimney Cricket, and forgone using these as read-a-loud stories with my munchkins. In my defense, I had few options. My local library system does not have an adequate selection of short and lively,  bat-themed stories. I took a risk and failed miserably.  Sadly, as I predicted, my preschoolers had a difficult time investing in these tales. For starters: the stories were much too long. The pop-culture references in Bats Around the Clock went over their heads. To make matters worse, the first group of preschoolers had a difficult time grasping the story with-in a story section that occurs in the middle of Bats in the Library, and became restless. So I switched over to narration mode and asked “I spy” questions. This tactic proved equally successful during the second storytime session. I skipped Stellaluna, and threw in a few rounds of Head and Shoulders and Dance Your Fingers to extend this week’s storytime sessions. As always, the extension activities went over well and we repeated each multiple times.