BOOKS TO DISPLAY
Little Owl’s Night by Divya Srininvasan
I’m Not Scared! by Jonathan Allen
I’m Not Cute! by Jonathan Allen
Owl Moon by Jane Yolen
Little Hoot by Amy Rosenthaal
The Littlest Owl by Caroline Pitcher
Cock-a-Doodle Hooooooo! by Mick Manning
Wow! Said the Owl by TIm Hopgood
Over in the Meadow by Olive Wadsworth

Action Rhyme: “Wide-Eyed Owl” (via King County Library System)
There’s a wide-eyed owl (circle your eyes with your hands)
With a pointed nose (make a beak with your fingers)
Two pointed ears (make ears with your fingers)
And claws for toes  (wiggle your “claws”)
He lives way up in the tree (point way up)
And when he looks at you (point to children)
He flaps his wings (flap your wings)
And says, “Whoo! Whoo!” (say “whoo”)

CRAFT: Owl on a Stick Puppets! 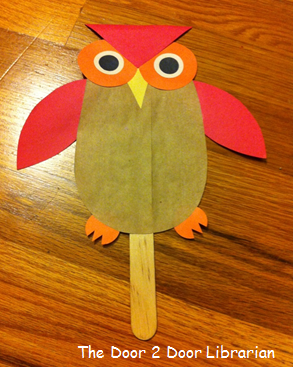 I’ve had this craft prepped and ready to go for a couple of months. I used various sized, hand-held circle craft punches to create all of the circular elements. I created templates in order to facilitate tracing dozens of wings, beaks, torsos and and triangular foreheads, and then cut everything out of paper bags and colored construction paper one afternoon back in the Fall. In order to make this a preschooler/toddler friendly craft I pre-glued the eyes and beaks on to the bodies prior to storytime. Once they finished gluing their owls, each child was bound and determined to show me their version before setting off across the library “hooting” loudly.

Bear’s New Friend and Goodnight, Owl! were by far the biggest hits of this week’s storytime sessions. I really like Owl Babies, but I struck out on the voices and cadence of the story, so most children had difficulty connecting with the text. Thus, I removed it from the Storytime lineup by Friday morning. The extension activities were successful, and the munchkins enjoyed counting from one to five during the Little Owl flannelboard activity.