A is for alligaor who lives in the swamp,
He dreams of adventure and apples to munch.
He flies to Alaska with an ant on his head,
The snow from above almost covers their sled.
The alligator had an action filled romp,
His alarm clock goes off and he’s awake in the swamp. 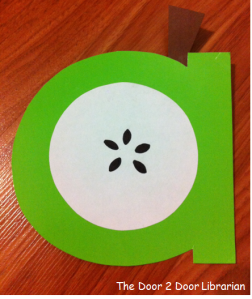 I got the inspiration for this simple and cute craft from the Totally Tots Blog. I decided to deviate from the original prototype, and have the kids make green apples instead of red. So I purchased a set of lime green plates from The 99 Cents store.  I created a basic, lower-case ‘a’ shaped template to use for tracing purposes. Leftover scrapbook paper was used to create the apple stems. I used plain white paper to fashion the apple core, and drew the apple seeds using a black permanent marker. I scanned the original apple core, and printed multiple copies which were cut out prior to storytime. I wanted to make assembly as easy as possible—due to the limited number of adults present.

Given my weekly storytime schedule at GBL2, I have decided to make storytime planning as easy and flexible as possible. So I will be presenting alphabet storytimes for the preschoolers from the child development center who attend storytime at GBL2. Each week I will focus on a new, consequtive letter until I reach XYZ (or land a paying library gig!). To kick off alphabet storytime, I began with the Letter ‘A.’ Overall, this theme was less successful than prior themes. The kids had a hard time staying focused, and Milo Armadillo (despite its theme and beautiful illustrations) was a poor read-a-loud choice. Unfortunately, the story was too long. I had to redirect the children’s attention by asking a number of questions throughout the tale. I’ll make adjustments for next week’s Letter B Storytime.